Just got a great story idea from watching news coverage on CPAC. Thanks, teabaggers and friends.

Am reading Sam Pink's I Am Going to Clone Myself then Kill the Clone and Eat It, which I just got in the mail. Thanks Sam Pink and friendly mailperson!

A man at work:

Nothing to do with men at work: http://www.youtube.com/watch?v=3OaBAbBVQEA
That's all I gots,
Ry

Oh, wait...just got a story accepted by Monkeybicycle! It has nothing to do with CPAC at all, I promise.
Posted by Ryder Collins at 1:42 PM No comments:

It's the fifth anniversary of HST's death; not that I'm keeping count, because that would be kinda morbid and weird. He's an authorial presence that's missed, though. When I first read Fear and Loathing, I was like, you can do that? I wanted to write like him; I wanted to live like him.

When Bush et al were running the country, I started losing hope in America. I wondered where were the writers like Thompson who would point out the corruption in our government, the corporate takeover of democracy, the war for oil and money, the squashing of civil liberties. 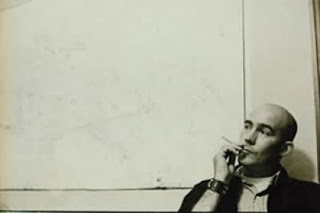 I wrote a short story about a traveling Word festival (kinda like Lollapalooza except for writers). Dave E. and Dave F.W. (rip DFW, as well = another sad, sad day for bibliogeeks) are the headliners of the show; Chuck P and Chuck D break in backstage and tie Billy C (the poet laureate) up so they can steal his spot. Lots of mayhem...but in the end, it is the ghost of HST who tells it like it really is...who keeps it real...for reals.

Here's HST's part (my homage to a great writer):

I was somewhere around Baltimore when I realized I’d been left out. I remember thinking something like “I feel a bit incorporeal, but that could be all the smoke I inhaled when I was shot out of a cannon . . .” And suddenly there was a terrible roar all around me and I realized it was coming from down below, so I swooped in like a bat to check out what was going on (and wished I had access to some hardcore drugs of some kind, some MDMA or even some DMT, although I wonder what a near-death experience would feel like when you’re really dead and I think that’s what my problem is, well, one of the lesser ones, anyways). I was dead and watching an audience I didn’t and couldn’t understand. I mean, this audience was eating this shit up. This audience had barely even heard of me. This audience didn’t know what it meant to never feel/be ironic.

Yeah, they were always depressed and didn’t know it; but, worse, I was somewhat depressed. And I was dead. I thought that shit went away after a while.

But, looking for the American Dream, after all these years, can make you feel that way. Still.

There were these two Okies onstage. Okay, they weren’t really Okies and they weren’t really lizards (as if the world, besides me and mine, were really split into such a simplistic dichotomy), but they definitely weren’t me. They definitely didn’t care. Or, okay, maybe it just seemed that way to me. I mean, I suffered through the death of the 60s, the death of idealism, and then I suffered through the 70s, through disco and John Denver and cocaine and all that, and the 80s and I can’t even get into that, and the 90s and politics and then, it just got worse. I always thought it’d break, like a storm or something, a Midwest tornado or a horrible monsoon (and I’d witnessed firsthand the corruption and greed and pure evil that couldn’t put New Orleans back together again or maybe I would witness, when you’re dead time travels all ways, around and through and in and out). I’d thought 1971 was a foul year, fuck.

I guess I don’t blame these two guys. The Daves. Unlike me, they’ve known all along the truth about the Dream. Their audience, too, I guess (there are very few Okies left in this world, in fact they’re near-extinct).

Someone’s gotta show them what’s going on, go Gonzo on them, cause it seems like no one’s paying attention. Habeas Corpus’s as dead as me; the borders are closing in.

“God’s mercy on you swine,” I shouted as I flew off to score some amyls or something. It never hurts to try, I guess, even now.


Look out for the lizards,
Ry

P.S. The story, in its entirety, was first published in Bust Down the Door and Eat All the Chickens.
Posted by Ryder Collins at 3:03 PM No comments:

but new publications do not. I get a little high every time I get a piece accepted.

Tell me what you think. Or not. I may still be reeling. I may be incandescent. I may be raving in  Bo Jackson's old four car garage at the end of a dead end street across from the sheriff's compound. Best place to rave in all of AL...

Don't know why anyone would bother making a "creepy" kewpie. They give me the screaming fantods just fine now.

Yours in heebie-jeebies,
Ry

And a song to march you out: http://www.youtube.com/watch?v=tCT23V7C9GU
Posted by Ryder Collins at 6:09 PM 2 comments:

Testing, or "more news from nowhere"

1. Everything Ryder's published and written:

a. period
b. to worship her
c. to publish her
d. to perform your civic duties

3. Security question she doesn't remember the answer to


4. Author she'd want with her in a barfight


5. What Ryder does when her work's rejected:

a. picks up strange men in bars and gets them to steal for her
b. sits on her Alabamy porch with a shotgun and moonshine
c. sits at a bar and steals shotguns and strange men
d. sits on strange porches and picks up normal men
e. pisses on the editor's porch a la Berryman

6. What she does when her work's accepted

a. picks up strange men in bars and gets them to steal for her
b. sits on her Alabamy porch with a shotgun and moonshine
c. sits at a bar and steals shotguns and strange men
d. sits on strange porches and picks up normal men
e. pisses on the editor's porch a la Berryman

a. all my bitches live in Texas
b. go ahead, fireworks
c. she doesn't have one because
1. sayings cheapen words and turns them into cliches
2. she doesn't have just one; she scours Urban Dictionary daily
3. she's not hip enough and lives in Alabamy
d. skeet
e.  she doesn't remember

a. Julie Browns on meth
b. the corporate takeover of the U.S.
c. a mama looking for her baby daddy
d. a sinister gasman named Fitzie with eyes like T.J. Eckleburg

I ripped the guts out of a poem and handed the bloody mess to flash fiction.

I kicked the baby out so I could remember my dreams.

I stabbed you in the neck so I could use your vest as parchment.

You'll show up in the bloody mess but won't recognize yourself for botox.

The baby'll come crawling back like those babies always do.

The vest'll remember nothing except the 70s and cocaine.

The vest'll save the last dance or something else cliche.


http://www.youtube.com/watch?v=iZhFIfsR-V0
Posted by Ryder Collins at 1:52 PM No comments: