love is a frog & catting thing: Homegirl! excerpt, yo

mama's eds at Honest are the good eds & they are busybusy with the new goodstuffs. Paul Kavanaugh's Iceberg and Willie Smith's nothing doing & they gots this epic fantasy coming out called The Vorrh by B. Catling.

mama's not trying to be the pretentious by talking about her eds but mama gets a little tickled that this alabama girl's gots eds. it makes her giggle a little as she sweats on her sunbleached porch & gets too hot to even lift the moonshine jug up to her mouth. that's when she calls for one of the chilluns & if they're smart they're already gone playing in the swamp out back...

For Richboy, love is a beating thing; love is a frog. Love is a tadpole you scoop out of pond scum and hold wiggling in your palm and you hold it there and watch it squirm and it squirms its small moist life against you and you feel something and you can let that thing grow and it will grow into a frog and it will have those long strong back legs and it will jumpkick its ass out of your hand at its first chance, you know, but you hope against hope the frog will stay there contented in your hand or you can start to feel something  in the small moist thing and you know what comes next, what the frog’ll do cos it’s happened before and you can’t take this feeling, beating, kicking, wettish thing so you close your hand quickly and squish the little squirmer before it can even get its fucking legs.
For Punkboy, love is a cat that creeps up slowly on soft padded paws and you don’t hear or see or smell or even feel this creeping stalking thing and then it’s there in your lap and it’s purring and rubbing and biting and clawing and catnippy and then it’s jumping free and chasing and being chased and catnippy again and there is the wailing and the barbed penis and the being stuck together and it’s  scary and crazy and you’re afraid of the pulling out and you are oh so high.
We know what it is for Homegirl; or what Homegirl thinks it is. 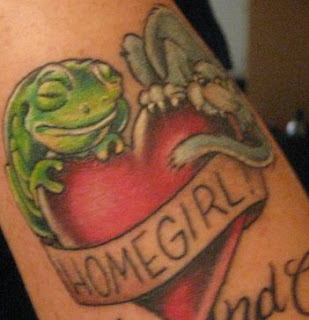 much & big loves,
mama
Posted by Ryder Collins at 11:18 AM No comments:

there are bitches & they are uni-sex & they don't like mama

this post is about how mama's found the answer to all unhappiness & her secret is so much better than The Secret & she has been all busybusy writing the book that will release all of mama's friends & foes from the existential crises, from samsara, from the earthys

this is bullshit, if you know mama... mama is still all existentialy mama wonders why she brought the chilluns into the world to deal with morality, too but mama's oldest knows how to make a mean manhattan & that just might be enough

at this point in her life

at this point in my life

teenmama used safety pins to slowly scrawl words into her arms. it was like cutting but not as dramatic or painful. it was a tedious pain & a tedious task. it was like life.

oh, & in the long while since mama's been on the bloggy (not like being on the rag at all; all right, sometimes it is..): mama's collaborated on a book of poems called I HOPE YOU GET UGLY & DIE


this poem is part of the collab

she's also working on her hater novel. her main character's not a hater but everyone thinks she is.

it's a lot like life.
Posted by Ryder Collins at 12:55 AM No comments: